The WordPress.com stats helper monkeys prepared a 2013 annual report for my blog!

The concert hall at the Sydney Opera House holds 2,700 people. This blog was viewed about 9,600 times in 2013. If it were a concert at Sydney Opera House, it would take about 4 sold-out performances for that many people to see it.

I’ve been wanting a blog makeover for some time now with a cute customized page and less clutter than what I have now.  I only just recently realized that in order to do this I’m going to have to move WordPress sites from a  .COM to a .ORG.  Apparently on WordPress.org you have a lot more control over your site since it’s self hosted.  Who knew?  Well probably a lot of people knew but I’m not one of them.

I’m excited to move over and have more control over my blog but there’s one problem, I can only transfer over email followers.  So that means those of you who are following through being a WordPress.com user are going to get lost.  And that’s why I’m putting this post out there so that if you want to continue to follow me you can do so by email, Bloglovin, or on Facebook all on the right hand side of the page!  I hope you all continue to follow and look for a new design hopefully to come in the next month!

I’m sure it’s no surprise that I love all things cupcake.  Not only is my kitchen cupcake themed but they’re starting to spill into other rooms too!

My mom was nice enough to give me an early Christmas present when I was home for Thanksgiving.  How amazing are these sheets?!?  They’re warm flannel sheets which is just what I needed now that it’s cold out and winter is coming.  They’re sure to give me sweet dreams.

Thanksgiving is rapidly approaching…seriously, where did November go?  I wasn’t planning on necessarily making any Thanksgiving cupcakes but we were having a potluck at work so of course I was going to bring cupcakes.  Knowing that someone was already bringing a pumpkin dessert…pumpkin cheesecake which was amazing!…I started racking my brain for something that would be Thanksgivingish.  Cranberries!  And orange with cranberry is a match mead in heaven! 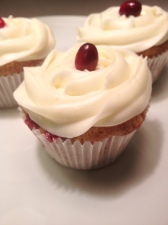 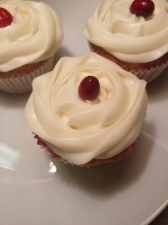 The bitterness of the cranberries mostly cooks out but gives it enough flavor to pair nicely with the sweetness of the batter and the orange.  This cupcake pairs very nicely with the  mostly neutral flavor of the cream cheese frosting.  But I did consider making a spiced version of the frosting with cinnamon and a bit of ginger which would probably go well.  Whatever you choose for the frosting, these will make a great end to a Thanksgiving or holiday meal.

Happy Halloween to all!  I didn’t get a chance to carve pumpkins this year but the picture above is from a friend’s pumpkin carving contest last year.  Can you guess which one is mine??  I’m sure it’s pretty obvious.  And I won the contest!

I’m not making any cupcakes this year for Halloween but came across these cute ones from Bakerella:

Maybe next year I’ll have to try out some of these decorations.  The pumpkins and spider webs are particularly cute!

I hope you all have a happy and safe Halloween!

Fall is the best time of year.  It’s finally cool and no longer humid, boot wearing weather!  Plus it’s leaf peeping time!  Looking at the beautiful colors of the fall is one of the few times that I love the weather in New England. 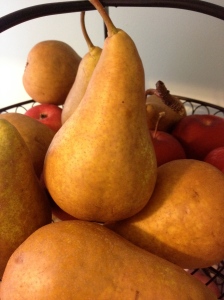 Going apple picking is one of my favorite fall activities.  If you spend any time on Pinterest you know that apples and pumpkins get all the credit in the fall recipe arena.  The apple and pumpkin definitely dominate most of the recipes you see at this time of the year.  But everyone forgets that fall is also pear season!  I love pear picking just as much as apple picking.  Plus pear recipes at this time of year seem so much more unique than an apple or pumpkin recipe.

These cupcakes taste like a bite of fall!  The pears make it so these cupcakes almost can’t dry out.  I had one when they were fresh and one from the freezer a week later and they tasted just as good as the first day.  The honey mascarpone frosting is pretty sweet but the actual cupcake isn’t super sugary so it balances out when you eat them together.  I brought these cupcakes into work and someone told me the cupcakes reminded her of her childhood.  She couldn’t quite pin point why but I’m going to assume that is a good thing!

My mom is a big fan of key lime pie.  And I don’t blame her, a buttery graham cracker crust with a tart lime 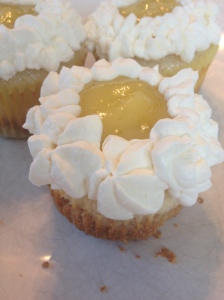 filling, and soft whipped cream on top.  There’s a lot to like there if you make it right.  This year I wasn’t going to be able to spend Mother’s Day with my mom so I decided to drive down to Connecticut the weekend before for a surprise Mother’s Day celebration.  On a side note, you can see how overdue this post is since I’m talking about something that happened in May.  Since we weren’t going to be spending actual Mother’s Day together I wanted to make her some special key lime cupcakes based on one of her favorite desserts.

These cupcakes taste almost exactly like a slice of key lime pie!  I had seen other recipes that were just key lime flavored but I think the graham cracker crust on the bottom of these really gives them the essence of the pie.  They are tart and sweet with a little bit of crunch from the crust on the bottom.  I think my mom was very happy with her special Mother’s Day cupcakes.

Adventures in Cupcakes
Blog at WordPress.com.